you guys are killing me here. haha

Honestly that's why I don't have vortecs. I already have my m/t valve covers, performer rpm intake, and buying rockers wasent something I wanted to spend my (very limited) car budget on. The heads I used I got for free. Put $400.00 (appx) in machine work, valve grind, etc, and was a big improvement. I estimated a vortec swap (with all related parts) at the $1000.00 range. I'm sure the vortecs would probably be all around better, but I have a 5 year old and a 7 week old so the almighty dollar rules.

yeah i agree I dont wanna spend 1k on just heads, now 400 isnt to bad, I need to check to see what mine are on my block,
but your setup sounds good, i have a intake already and dont wanna buy another one really.

Look under the valve cover and find a part #. Look online to see what you have. I don't remember what site I used , but googling it should get results pretty easily. My guess is You probably have 76cc "smog" heads, but you may get lucky depending what has been done to your car in the past.

It's expensive to do any kind of engine build these days.

yeah your telling me, on another note has anyone seen or made a dash with custom gauges?
http://www.pro-touring.com/showthread.php?91679-69-camaro-gauge-cluster
or you think i can get away with getting the camaro one?

thepossumface wrote:yeah your telling me, on another note has anyone seen or made a dash with custom gauges?

How about fitting aftermarket gauges into the existing dash? These are the VDO Cockpit series. VDO is the only gauge manufacturer I could find with a 4" speedo and tach available, and they have almost a full complement in this series, including the transmission gauges I have on the pillar. The only exception is the fuel pressure gauge from Nordskog on the console. 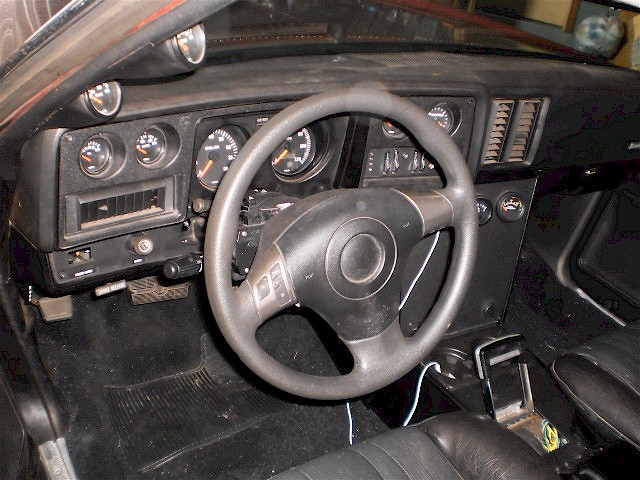 i think i saw this pic on google once, but yes I would like to keep the dash just aftermarket gauges like these but know the name of them? or what they run?
i like your setup looks clean but the tach and speedo is 4"? i thought it was 5 maybe i measured it wrong

I used the VDO Cockpit series of gauges, though the Vision series is also close, and there are other series available. They're reasonably priced at egauges.com, though you can get them from a lot of vendors. They're also backlit -- you can swap out the bulbs for LEDs and have them light up in color -- mine are red at night (with apologies for mediocre photography): 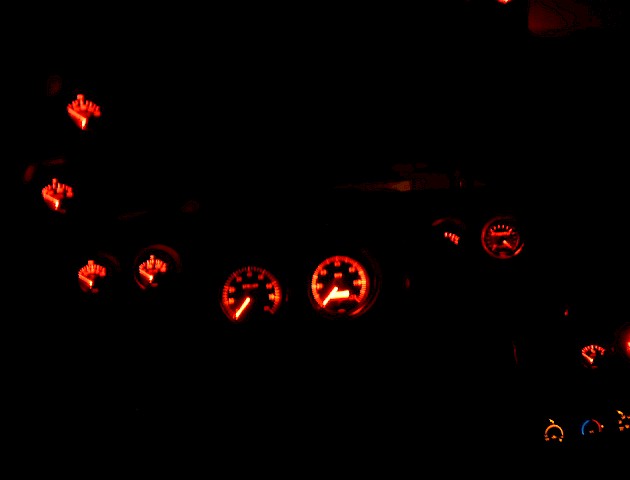 A 4 1/2" gauge would have been perfect, but 4" was as close as I could get. The two most popular sizes other manufacturers make are 5" (too big) and 3 5/8" (way too small). That's on a Monte -- yours might measure out differently, so you might have more choices.

i think 21/2 should fit in mine, but i like yours but if i can get green lights I would love that!! I got pretty much my whole inside of my car torn apart beside my driver chair and basic stuff to drive and a speed gauge no gas haha so i gotta guess

http://www.harborfreight.com/electronic-triple-auto-gauge-set-41017.html
found these and I got a cupon for 20% off not to bad for a temp setup I may run these with a brighter bulb and Ill need a wiring on how to hook up the lights up though, cant seem to find a shop book.

thepossumface wrote:i think 21/2 should fit in mine, but i like yours but if i can get green lights I would love that!! I got pretty much my whole inside of my car torn apart beside my driver chair and basic stuff to drive and a speed gauge no gas haha so i gotta guess

The smaller gauges are all 2 1/16", which is a standard size that every manufacturer makes, so you should have no trouble finding something you like by somebody. However, different manufacturers will have different lighting setups, some of which will be proprietary, and many will come with a plain-jane white incandescent bulb. One of the things I liked about VDO was that I could swap in sockets and LEDs and have any color I wanted, and the colors are truer than what you would get with an incandescent bulb. The LEDs also come in a nice green.

thepossumface wrote:http://www.harborfreight.com/electronic-triple-auto-gauge-set-41017.html
found these and I got a cupon for 20% off not to bad for a temp setup I may run these with a brighter bulb and Ill need a wiring on how to hook up the lights up though, cant seem to find a shop book.

Keep in mind that gauges are one place where the rule "you get what you pay for" holds true. While those will work for a while, the gauges themselves will be mechanical, meaning you'll have to plumb an oil line into your cabin to the pressure gauge, and sooner or later those always spring a leak. Electric cost more, but are definitely the way to go, even if you have to buy the gauges one at a time as you can afford them. Also, a voltmeter will tell you more than an ammeter, and the ammeter can only handle so much juice and will be a PITA to wire.

Any respectable set of gauges will come with the necessary wiring diagrams, but if you should find yourself stumped a lot of people here have already been down that road and can offer their wisdom, and probably copies of the factory wiring diagrams.

Do you already have the round style factory gauges? If so, why not get some white covers for them and use a green LED. You can find the covers for 20 bucks on Ebay. I and someone else has a set, they look really good!

http://stores.ebay.com/White-Gauges/_i.html?_nkw=73+chevelle&submit=Search&_sid=10585820 here they are!
I did mine several years ago and used blue LED's on my elco. I'll be doing a set in my chevelle but with red LED's

do you have some pics i may do that!! looks alot cheaper

Here is mine that I did if it helps. 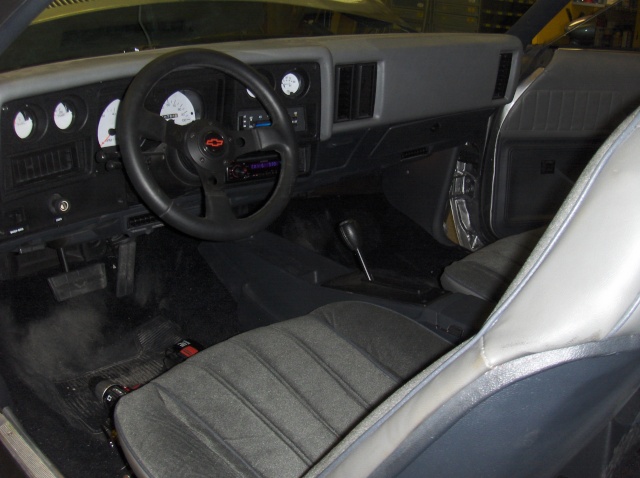 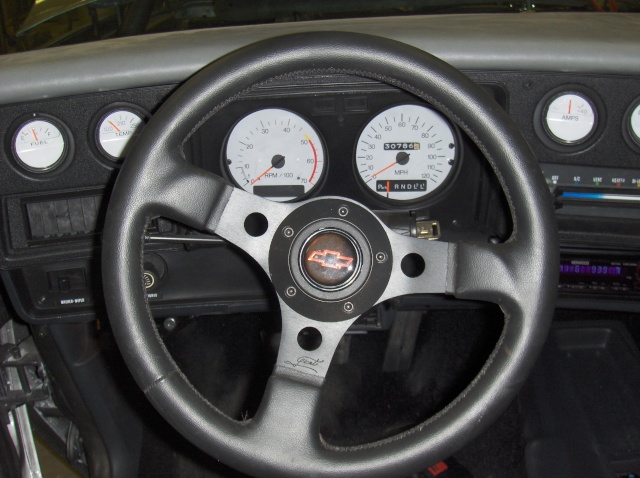 It makes the dash look a lot better and they are stickers so it doesn't matter what the original gauges looked like. I'm very happy with mine, and being in Arizona with the high heat, they have not discolored or lifted after 8yrs.. Still looks as good as they did when installed. Heck even the LED's still work great. Remember, you can get those in several colors. The LED's really bring out the gauges!

i may do that but got me a sunpro temp gauge to see my temp and i had to force it in the spot and cut a lil to make it fit, guess 21/2 is too big lol

so i may have a issue my car wont start after new intake gaskets, it spins but not enough fire to kick on i think its something w/ my dizzy i think the spring between the coil and bottom fell off when i pulled it, would that cause it

could be off 180 degrees

i just moved the dizzy around in the spot it was taken out of i marked it, and the carb spit fire and almost kept on lucky i had a towel to put it out.

still wont start...found the plunger that goes under the coil but its making wierd sounds from the headers like a backfire but then dosent this is a first for me & smoke comes from my carb the back 2 barrals

When an engine backfires thru carb. timing is too far advanced, when it backfires in the exhaust it is too far retarded.  1 tooth on the dizzy, you can make up for on the turning of the dizzy once engine is running. 2 teeth or more and the dizzy will have to be removed and lined up again and reinstalled.  You are getting spark, just not at the right time.     You might still be off on the initial timing of the dizzy.  I think you might be too far advanced. I recommend pulling it out completely and starting from scratch.  Are you aware the dizzy turns the rotor as you remove from engine?  It may have turned more than you anticipated when you reinstalled.   Here's what I suggest.  Remove dizzy completely, turn engine over until mark lines up with tab on timing cover. HOWEVER, you need to know for certain which stroke you are on.  Remove drivers valve cover and watch the 2 front rockers as you rotate the engine.  When the front,(exhaust) rocker is closing and just as the 2nd(intake) rocker is starting to open. That's where true TDC is. Make sure you get it right, you might have to spin engine over a few times to get it exact.  Then turn rotor backwards to about 3 o'clock position, and install in engine. As dizzy drops, it will turn clockwise, and wont drop all the way down.  When I know I got it where I want it, I rotate engine until dizzy fully drops. This is making the oil pump shaft, and dizzy connecting with each other.  You could physically turn the oil pump with a screwdriver, but its very hard to get it right to line up with dizzy as it turns and drops into engine.  Once the dizzy is in engine, button everything down and turn dizzy as you crank engine to find the sweet spot, once it fires and stays running then go back and time with a timing light. 8 degrees before TDC, on the timing mark and tab.  Lets us know how you make out.

Similar topics
» Hello from Florida!
» Is there anyone near the Florida Area?
» New member from S Florida