OK so I'm back at this now that it's nice enough to work in the garage.

I'm unable to figure out how to get the trim of the seat upholstery cover off so I can remove the hard plastic shell that is held on with "two screws" as somebody mentioned. I keep feeling like I'm going to break something if I pry too hard. Can anyone offer some advice.

Not sure if you're aware of this, but unlike the way repro seat covers are provided with edge trim supplied separately, the factory edge trim is stitched to the seat fabric/vinyl. Also, they used small metal clips within the trim's u- channel to add further holding power. You just need to be more forceful in prying up one end (found at the bottom) and working your way around.

OK so I pulled harder and off it came.  The seats I've got have OE style replacement upholstery covers on them so the edge trim is stitched to the edge of the vinyl. I've got the backs off now and was wondering if anyone had ever used JBweld to fill in the divots and gouges in the plastic?  Or is there something else to fill in the blemishes?

Thanks to Mcarlo77 got my console in and looking good.

Sorting out the shifter next and then everything goes back in.  Hopefully in time for

2015 Fleetwood Country Cruize-In I believe it's billed as the biggest outdoor show in North America.  Anybody comeing?

I just brought home a spare swivel bucket seat I found in a '77 Monte Carlo (Light Buckskin) that had serious scratches and gouges on the seat back. They were too numerous to deal with on a spot basis, so I decided the only approach was to sand down the entire back. Yeah, it pretty much erased the textured surface...but, what are ya gonna do?! It turned out nice and is ready for paint.

I've been working with JB Weld using it like Bondo filling moon craters in my trunk pan. I think it would do the job for you, but it takes more work to sand and feather it into the surrounding area. You're going to end up with a smooth surface wherever you use it, so why not just sand and feather the spots without it?

What about "half time" body filler? Basically a bondo (2 part) that sands out with 240 grit. Hence the name half time...ie it saves time. I've used it with good results. Iirc USC makes it.

Gentlemen - this is what I like about this place.

So the plan is,

1.sand off all the loose like stuff, already done as I tried to feather in some of the smaller ones and it was working.

2. JBweld to fill the larger gouges as some are fairly deep, and sand them smooth

jB weld may crack out if piece is flexed installing. 3M makes a plastic bumper filler that stays flex able. I would try that you can sand it like bondo

Wally - you are the man! Two part flexible bumper repair worked like a charm on the bases of the swivels, so today the backs get that treatment.

Dinomyte wrote:Wally - you are the man!  Two part flexible bumper repair worked like a charm on the bases of the swivels, so today the backs get that treatment.

Let me know how it turns out. You may want to take some before during and after shots for everyone.

I've sanded out the ridges gouges and other imperfections, some of the texture was also sanded away. Cleaned the backs really well, and then applied a thin coat of rocker guard. I even got the light coloured stuff as opposed to black. This all went well.

Next day I applied paint, now I'd forgotten that rocker guard really sucks up paint, and as such I've put 7 or 8 coats on and still looks like it needs more. I took pictures but they don't show what you can see with out a flash going off. It looks like I've got light and dark patches. The texture feels right but looks like I've done a poor job or painting. I'm wondering if it's because of the light colours as opposed to black?

I have used 3M clear brand of rock guard and it the paint covered in two coats. I used SEM paint

Wallyuph wrote:I have used 3M clear brand of rock guard and it the paint covered in two coats. I used SEM paint

Used SEM paint too, and not sure of the brand of rock guard but it was white as opposed to clear.

I'm tempted to sand and start over again with out the rock guard, but really want to make it Saturdays Cruize-In.

On a related note here.

Interior pieces get installed in the following order. Yes I've had to remove and reinstall a number of pieces today to get it right.

0 - the fixed piece between the rear window and the parcel tray.
1 - head liner
2 - the panels at the side of the back seat, assemble the two pieces together then install the panel with a single screw, repeat for the other side.
3 - the panel between head liner and rear window. This is the one with the really long panel plug, which is for guidance.
4 - sail panels, left and right. (don't put the parcel tray in before this, you'll never get them in)
5 - piece on the A pillar - with a single screw
6 - piece above the door - clips and a screw
7 - piece between the front window and the head liner
8 - the rear parcel tray, don't forget the two pieces of sponge, they stop a lot of rattling.
9 - rear seat back, installing two outside seat belts to hold it in place,

That's as far as I got today, I'll edit this later but I'm sure it's carpet, console, inner belts, seats, outer belts, rear seat back, door sills,

The doors are bottom half then top half, install the arm rest if you removed it before the lower panel.

That's some nice progress, Dino! Hopefully, my box of goodies will show up in the next couple of days and you can button up that interior before Saturday!

Steve - keep your fingers and toes crossed, I am . . . . worst case scenario is I'm driving the one and only bucket seat console care with a column shifter

I'll just cut a piece of plastic to cover the opening for the shifter in the console.

Now for progress on the seat backs. I sanded them down a little, just enough to scuff things with 220 paper, and primed them when I got home from work, got two coats of paint on them after dinner, they are looking better already, but wet paint is always deceiving.

Got everything back together yesterday, but need to know the distance between the outside rear mount for the swivel bucket seat and the mount for the seat belt. I used a bracket I was give that I thought got bolted into the rear outside mount for the bench seat but that's the wrong position. I can't get the seat back far enough, never mind all the way back.

I'll post pictures once the carpet issue is solved. Got a ACC carpet through NOS Reproductions here in London, and it's too narrow, by 3/4" on each side

What kind of seat belts are you using?

Roadcaptain S3 wrote:What kind of seat belts are you using?

I've got a correct set of swivel bucket seat belts, got them from Mcarlo77. They have a floor and a roof mounted re-tractor, the roof one goes in the same place, the floor one needed a new mount but I've got that mount in the wrong place. (My car had a bench seat in it that was removed) None of the other mount points where / are in the floor pan.

If I'm understanding your post, I had the same problem from doing the same swap. If your car is like mine, you won't have a good mounting point in the floor for the lower retractor. If you use factory belts, the seat won't go back far enough. My 77 had the old mount points from the bench belts, and they would have worked, but not well.

I would either have had to drill holes in the floor, fab a bracket or do what I did, which was use belts from a later model car.

The bummer is that some of the earlier cars had 2 separate mounting points for
bench and/or swivel belts. But my 77 only had one.

Dino...here is the best pic I have showing the relationship of rear outer swivel bucket seat mount (5" lg brkt) to seat belt mount (the empty hole to the right or behind it). This is the driver side. Notice the seat belt hole is just about centered to the oval floor pan access plate (wth is the purpose of that plate, anyway...drainage?). Using measurements from the photo, I'd say about 8 3/4" ctr-to-ctr from seat mount stud to seat belt hole. Wished I'd known you needed these dimensions as I could have taken them this past weekend when I was out cutting some brackets from a swivel bucket car. If this info doesn't help, let me know and I'll get you actual measurements next time I'm out there. 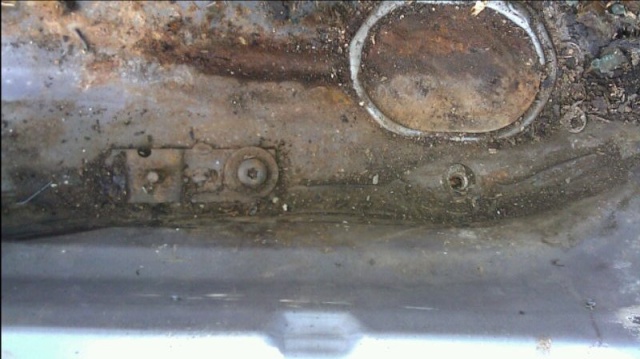 Mcarlo77 wrote:Dino...here is the best pic I have showing the relationship of rear outer swivel bucket seat mount (5" lg brkt) to seat belt mount (the empty hole to the right or behind it).  This is the driver side.  Notice the seat belt hole is just about centered to the oval floor pan access plate (wth is the purpose of that plate, anyway...drainage?).  Using measurements from the photo, I'd say about 8 3/4" ctr-to-ctr from seat mount stud to seat belt hole.  Wished I'd known you needed these dimensions as I could have taken them this past weekend when I was out cutting some brackets from a swivel bucket car.  If this info doesn't help, let me know and I'll get you actual measurements next time I'm out there.

Thanks Steve - just to make sure I've got this right this time.

From LEFT to RIGHT in the picture we have

If this is right I know what i did wrong.  I thought the bracket was for the re-tractor, and bolted under the rear outward foot of the seat.

BTW - the "floor pan access plate" aka drain hole serves the purpose of allowing any sort of fluid to drain out during production, and also a place for any fluid  to collect and rust out the plug rather than the floor pan, then you can replace the plug, at least that's what I've been told.

Moved the seat belts to the appropriate place, now I can back the seat up far enough to drive comfortably.

Next on the list is to get the console shifter in and fix the rug at the same time.

I was looking at all sorts of stuff for the floor shifter I just can't find information on the gear indicator. I've got a column shift car that's being converted to floor shift. I've got a tilt column (but not ready to go in) is the indicator connected the same way for floor and column? Am I looking for information I don't need?

When mine was converted to floor shift (Hurst dual gate). The trans shop hooked up the original gear selector (on the dash) unfortunately I don't know what exactly they did to do so.

Floor and column shift use the same method of hookup for the indicator...unless you have a '73 shifter/console that has the indicator on the console.