dynchel wrote:Personally, I'm not sold on replacing the dizzy, since I don't believe it would make any difference on my mild combination.

dynchel wrote:Personally, I'm not sold on replacing the dizzy, since I don't believe it would make any difference on my mild cmbination.

It won't. The distributor just becomes a trigger for the box at that point. As long as you have the low resistance button under the coil, there is not much else to worry about. The 78 made if I remember 390 rwhp with that set up in it. So about 450 crank hp.

The starter was a perfect fit & there is plenty of room by the block & more room for the old Hooker than the "mini" starter I was running. Denso's came with Corvettes, not sure what else they were on.  I thought I'd take a shot & see as even the mini starter was a P.I.A. to mount on the block. Worst case would have just returned it.  (Thank you Autozone!)  The new one is lighter too.

Bad news is my Carb is not running very well.  There appears to be a busted piece that works with a small diaphragm near the Elec. Choke & an adjustment screw.  It seems to work the secondaries.  Well, I've been eying this for a while now, anyone have one?

Sorry no pics today, will post when I can take some good pics off the test stand!  Time to get back to the Body

Paul, the secondary diaphragm is busted? Its about ten bucks to replace but use a little grease on the screws when you put it back together so you dont snag the screws. If thats what you are talking about? Im not sure what you are describing. Maybe its just you. Sniffing model glue again?

Dont buy one of those MSD street fire distributors its made in China just like the one you can get mentioned above for what? 80 bucks. Rebuilding the original with better parts is a better idea unless of course its got a million miles on it.

China?  Really- I thought they were built in Bowling Green KY.  Oh well.

This is the carb before the rebuild.  Piece in the circle looks like it's missing something.  there is a little green lever there that you can't see in the pic but it looks like it broke off somehow. 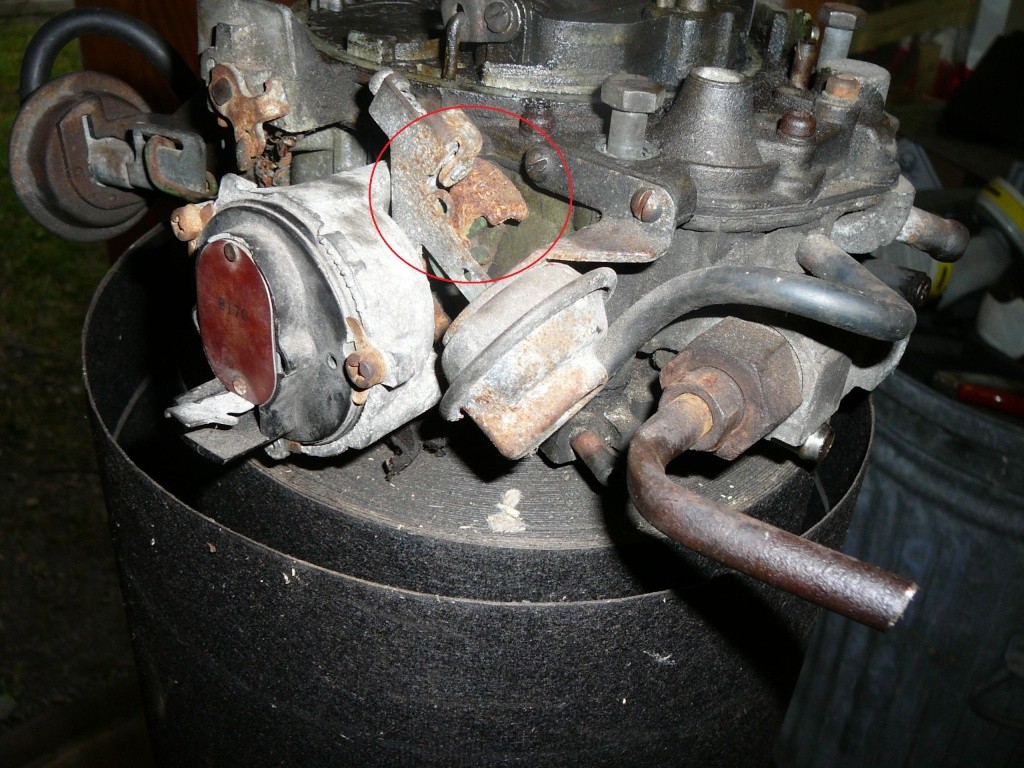 Here is a good shot of it on a good reuild. I'll go on quadrajetparts.com & see if they have what I need. 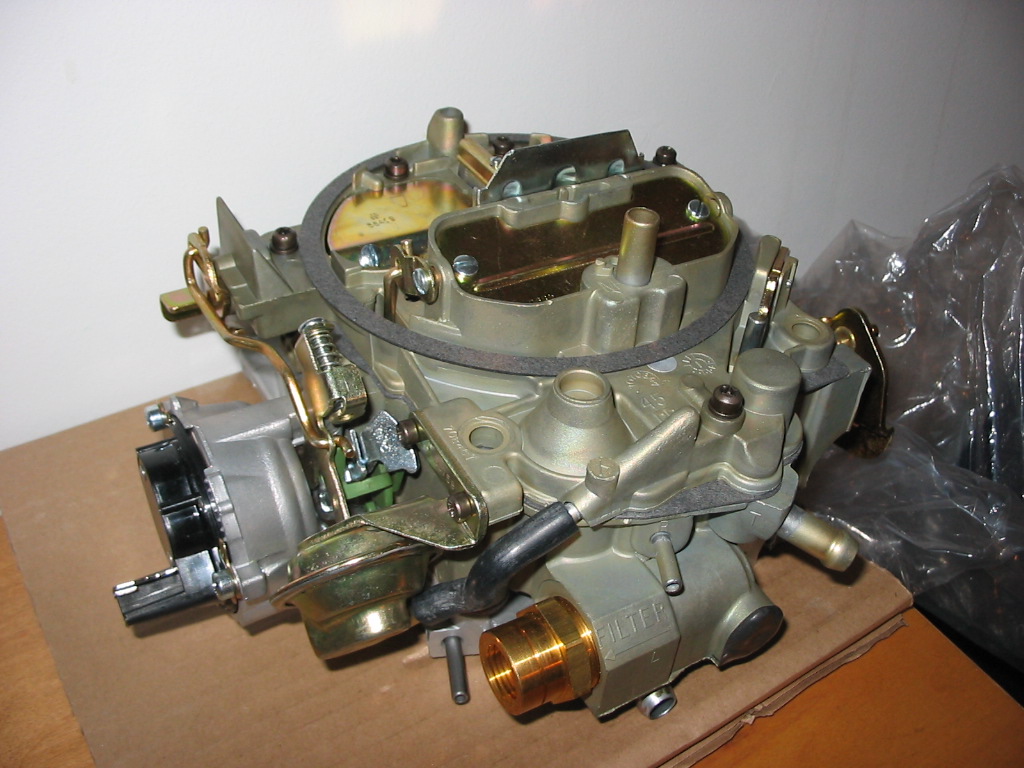 It's interesting to me so many of you are rebuilding (and using) quadra jets.  When I was younger that was the first thing to get replaced.  If your buddy's saw one you would get teased about the quadra junk, or quadra bog, on your "hot rod". The first think my uncle (who is a mechanic) told me when he saw the car was "if you want to go fast get a holley" so one of my first purchases was a performer rpm intake and a holley 4160 to go with it.   I even gave away my q-jet to a buddy's father to use on his '37 ford street rod. (Although it wasn't original to my car)

That's b/c the vast majority of people don't know how to tune them.  They're complicated, especially if their older.  Lots of parts to replace if not quite right.

In the 80's (86 or 87 was the last year for Rochester Carbs) they not only built them for GM but Mopar cars were using them too.

Yes, a quadrajet is a great carb but you have to know what your doing. They can produce a huge amount of power reliably. A good book on them is here. http://www.cliffshighperformance.com/buy_book_2.html

Also, some quadrajet models are more desirable than others. There is information about different models and mods. Lots of people run them on quick cars.

I still have my original 4bbl manifold with the quadrajet still sitting on it. I prefer the holley due to simplicity and proven performance.

I need (want) a 750 cfm. Might look into Holley as well. Cliff Ruggles book is the q-jet bible for sure. I like my carb it's just "so old" & needs a bunch of little things that IDK if it's worth it in terms of time spent. I need to get that dang motor back in the car asap. Sick of looking at a covered Malibu in the driveway.

Most Q-jets are the 750 CFM type. My Caddy engine has an 800, and I believe some other GM big blocks had them.
Some models can be converted to an electric choke. The models with the divorced choke worked OK. The hot air type were usually OK until the heat tube rusted through in the exhaust cross-over passage.

China? Really- I thought they were built in Bowling Green KY. Oh well


The Street Fire line of distributors from MSD is made in China. The ones usually sold in the places like Autozone or Advanced auto

HEY ANT...happy 4th!  I'm gonna see if I can figure it out today. Hopefully I can fix/tune & figure out the linkage.  I saw some pieces online and if all else fails I'll make one up.

Sad to say I had to put the Q-jet on injured reserve.  Choke is not up to snuff & linkage is broken behind it.  So I made a bit of an upgrade and I'm happy that I did.  After some fiddling over the last few nights I got it going good with a new carb.  Got a Holley 670 Street Avenger with Vacc secondaries.  Thing is friggin SCHWEET. 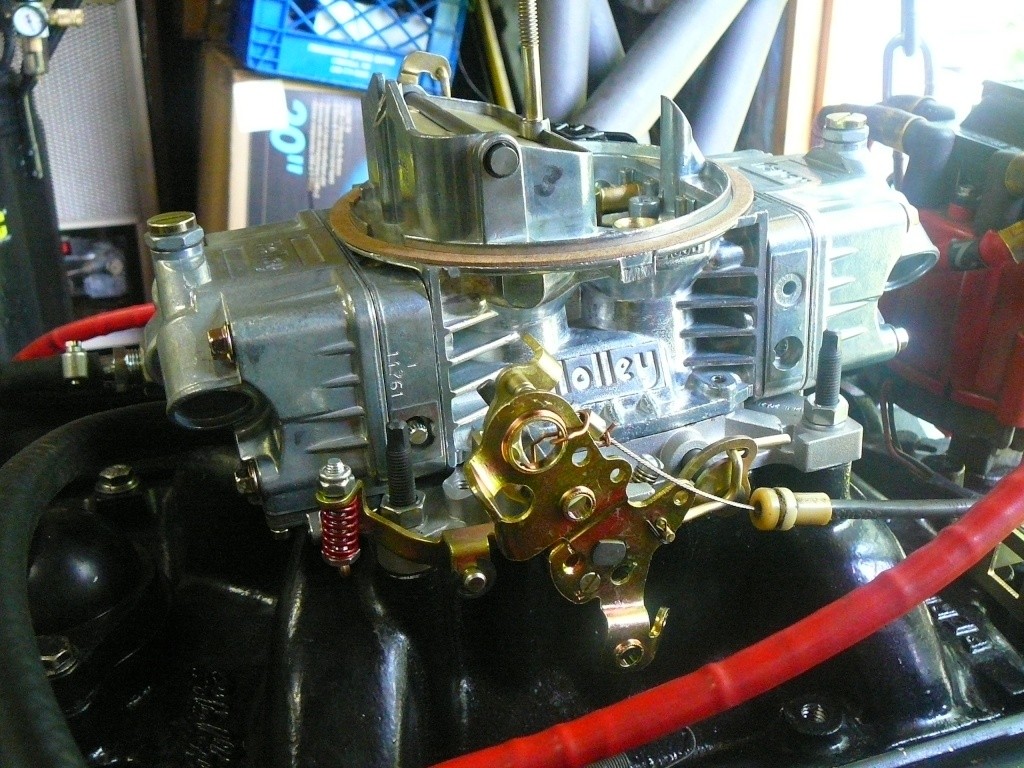 Here are a couple short vids with the new set up.

Congrats,  I've never been a quadrajunk fan.  I always preferred stuff that's easy to adjust / work on.  That's why I have manual choke holley.

Thanks John.  It's far from junk though & will be repaired & kept as a spare.  The Holley was super easy to tune.

Rebuilt M4ME Q jets are "HD" modified units that were made for mid to late 1980's Dodge B-Series trucks.  There is a company in Canada that rebuilds these & I'm going to get the necessary components to fix it.  They're about $360.00 on Rock Auto.

Sorry, when I was a teenager quadrajets were the first thing to be "upgraded".  There were plenty of names... Quadrajunk, quadrabog, rottenchester, you get the idea.  This still sticks in my mind (whether or not its true idk, I replaced mine early on based on what was the norm). I never regretted it.

No offense taken.  To tell the truth- I'm really liking the Holley better too.  There are a bunch of nice features that make it easy to adjust.  I had to adjust the choke slightly for it to open a bit wider when starting it and the fuel pump lever was off a smidgen too.  I had to turn the curb idle adjustment screw quite a bit in order to get it to the 1500 rpm cam spec.  That was like 3 turns & change and it was done!

Plus a rebuild kit is $25.00, takes a hour to rebuild, and can be done by anyone with the silghtest mechanical ability.

My Malibu has a Holley 3310 on it ( vac secondaries )  I've done a bunch of mods to  it over the years though. The electric choke kit works good.  I have a box of Holley parts, with pump cams, springs, jets etc , which I rarely need anymore, since it's set up to where it works fine.
One thing about the Q-jet, if the throttle shaft is loose in the base, it needs bushings, and the reamer to do it is expensive.  I have one apart on the bench right now, and not sure if I'm going to rebuild it or just toss it.  It's the hot-air type choke, which I don't know if it can be converted to electric.

That's a nice set up Bill.  I reckon you need all that 800 for that big motor. One thing about my M4ME might have been "too much" carb for the 350, even with the modified cam (busted stuff not withstanding).  Holley has this cool "Selector" thing one their site that walks you through it.  You answer questions and then it gives you carb choices at the end to choose from based on the CFM you need to run the motor.

Here's a couple more pics of the Carb. 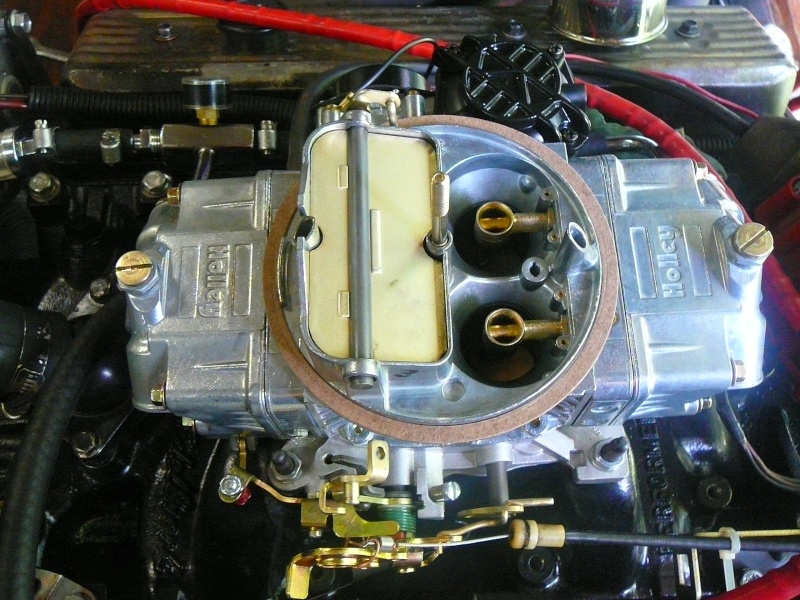 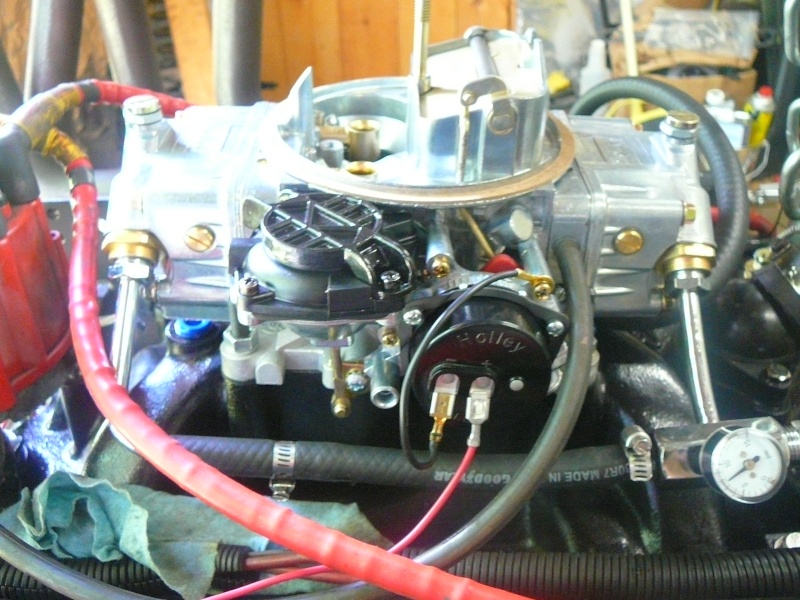 I hooked up the electric choke like this temporarily direct to the fuse box which is off the car w/ the column (black wire in the "ACC" slot). Really made it easy to do it this way.  The pink pin is to light up the Tach w/ the ignition on.

I have to reroute the fuel line too it's a bit Mickey Mouse for now but functional.  I have the old metal line & plan to reuse that or maybe get one of those mechanical pumps that will allow you to "turn" the line.  Fuel pressure was right around 7.5 psi and this little filter is nice too as you can see the fuel unlike the metal one which I had on the Q Jet set up. 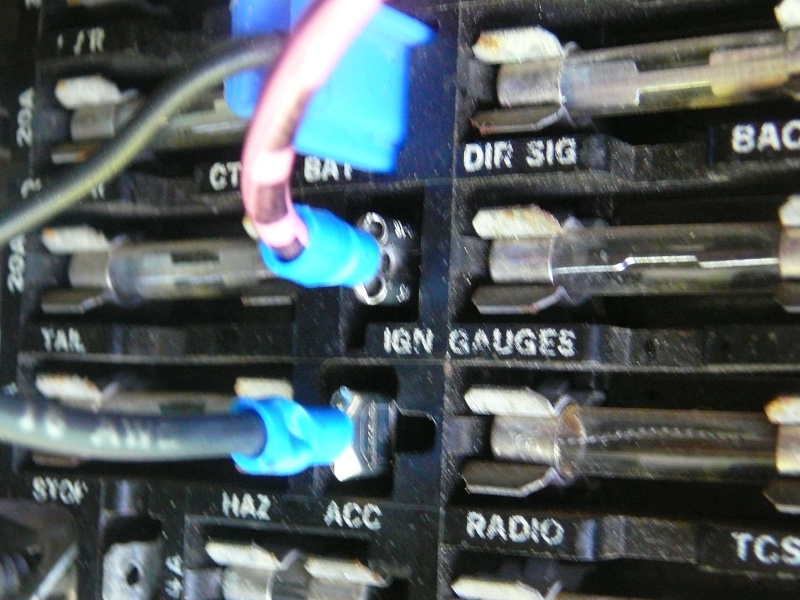 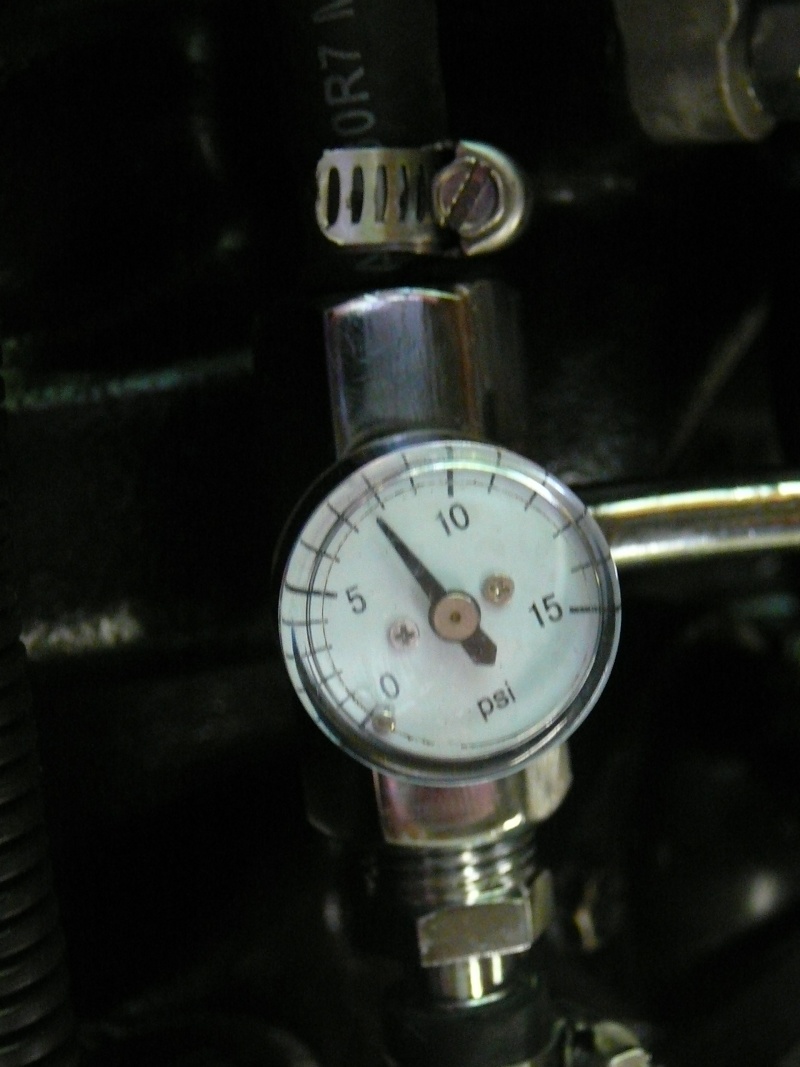 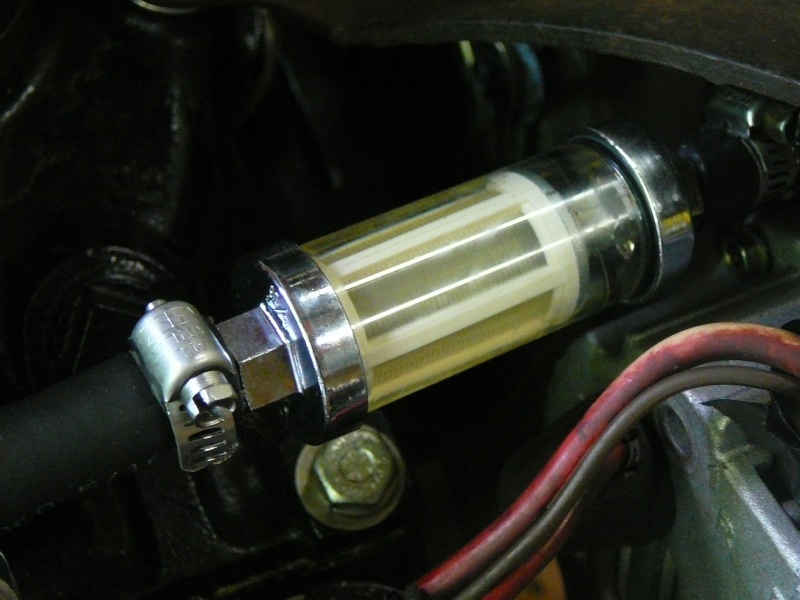 I ran plastic fuel line on my car (the same kind used on some new cars).  The line from the pump to the carb is plastic also (covered with aluminum insulation)  with quick releases at both ends..ie  the line can be removed with no tools in about 3 seconds.  For a filter I put a new car style inline filter (again with quick releases) over the rear end.

Finally got out to finish tearing down the front suspension.  This time I was a bit braver & didn't bother with using a spring compressor (but still used a chain for safety).  Used my little pneumatic chisel to drill out the shock nut- the trigger broke shortly after when I was making indents with it for pilot holes on the control arm ball joint.  Plastic trigger- thank you Harbor Freight.

Got some prep done on the firewall & other side of the frame too. The POR-15 I used has held up very well.  It's been quite a while since I've had the cover off the body.  Pretty impressed with the coating.  Roof looks good too, just a couple small spots were I didn't get enough coverage I guess. 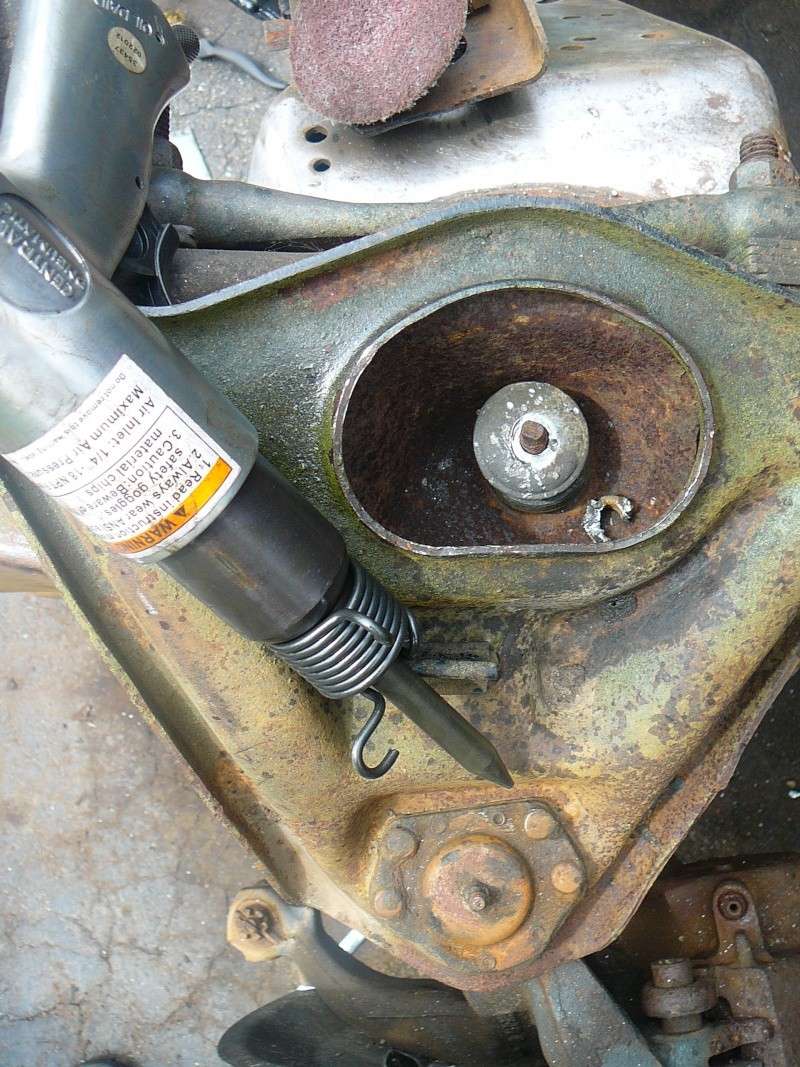 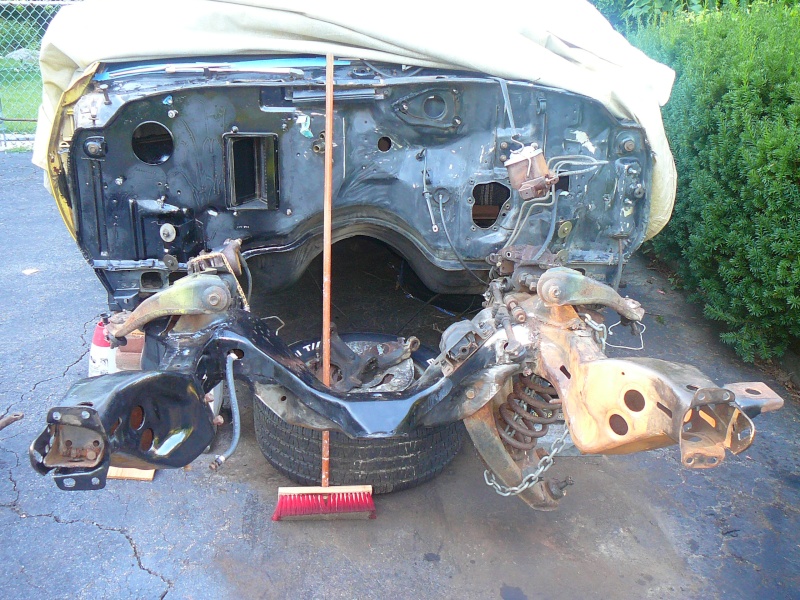 Something I found a bit odd:  The upper control arms have different bars up top, is that factory correct?  R side is tubular and the L is square with an offset. 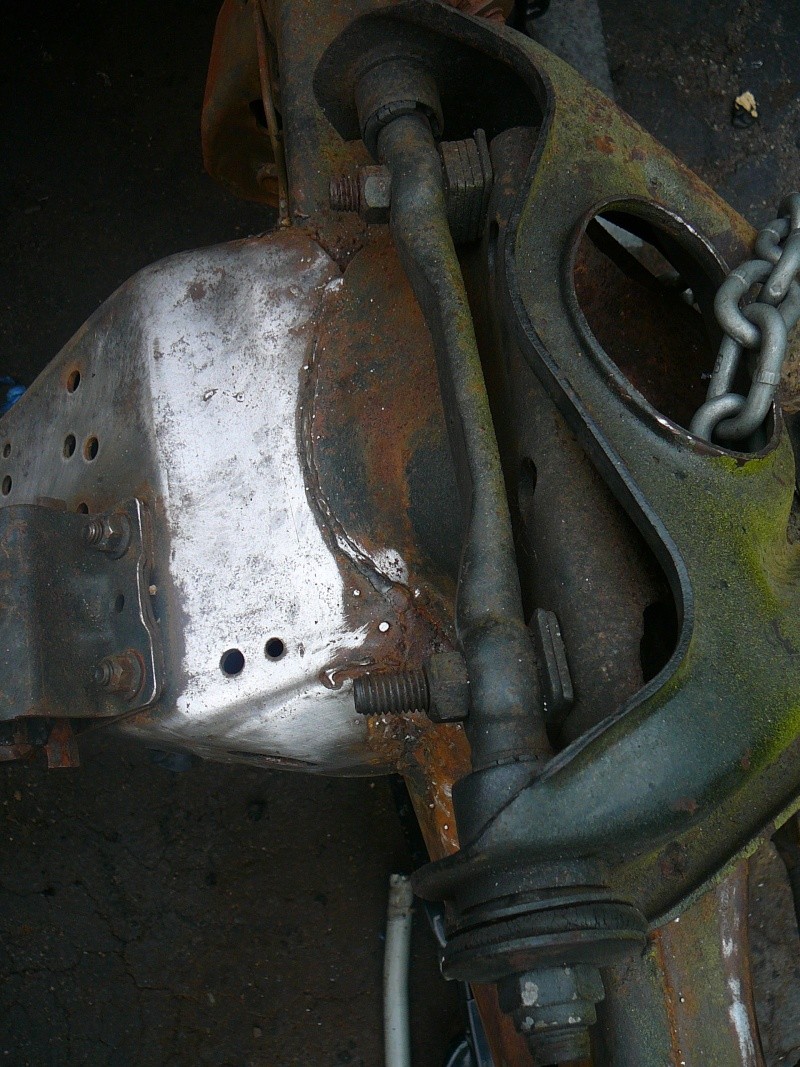 Looking good! I was starting to wonder if you still had the car

The control arms are just like i have on mine, not sure why there is a difference between the two sides.